A couple of weeks ago the Eisner Award judges nominated Telltale Game's SAM & MAX SURFIN' the HIGHWAY Anniversary Edition in the category of BEST GRAPHIC ALBUM-REPRINT. Since I've done only a smattering of comics in my career I suppose it's fortunate for me that they have a reprint category at all.

Telltale Games motivated the project and it was tough sifting through all the old material and patching and cleaning up some of the new pages that hadn't been included in the original. Once I got through that I wondered about how a new volume of this book should look. I had scrawled a rough concept, wanting to have fun with the idea of this book being some rare dusty relic from Grandma's attic. Posing as Max I drew and wrote on maps of the Philippines for the interior covers and scanned a real Sam & Max police badge to use in a collage. It was fun to cobble together the disturbing author photo made from an antique snapshot found in my wife's grandparent's basement.

Jake Rodkin at Telltale did the heavy lifting on the project. Pages were scanned from old film and originals, painstakingly cleaned-up, graphic design of the covers, emboss mechanicals devised, colorful personalities wrangled. Two versions of the book were created; a paperback with the embossed cover and the Limited Edition hardcover with signed numbered bookplates. That's the one that's up for the Eisner, alongside some very cool books including Vol 1 and 2 of the Hellboy Library Edition by my old pal Mike Mignola.

Telltale is so excited about the nomination that they have some bundles on sale that offer various combinations of the books, games and other Sam & Max items. Check out: TELLTALE GAMES EISNER SPECIALS.

Some of my extremely talented collegues are nominated for Eisners as well, all in the BEST PAINTER/MULTIMEDIA ARTIST:
Enrico Casarosa's Venice Chronicles
Scott Morse's TIGER!TIGER!TIGER! also nominated for BEST LETTERING
and Jill Thompson for Magic Trixie Sleeps Over

The Awards are presented during San Diego's Comic-Con International at the end of July. Should be a fun night. 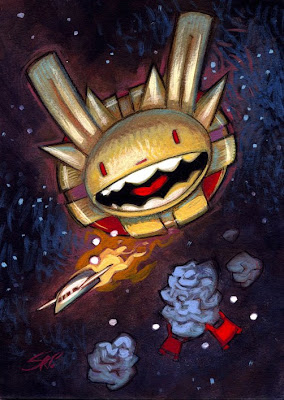