I did this piece over a couple of evenings for a charity auction for the Cartoon Art Museum in San Francisco. I'm pretty happy with the colors otherwise there are some other issues that I would treat differently if I allowed myself some more time. I expect I'll take another whirl with this character. Her name is Merida, the lead from Pixar's "Brave" coming out next summer. It's a project I've been involved with for quite a while, also known as my "day job". 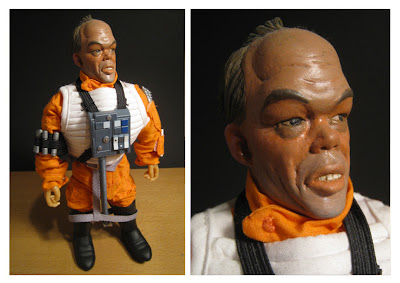 At the risk of further ratting myself out as a kit basher or doll maker here's another impulse project. This little person head came extra with a Billiken vinyl Saucer Man model - supposedly depicting an actor who wore one of the Saucer Man costumes in the old movie.

I painted the head with acrylics, cut down the limbs on a reissued Captain Action body to give him the right proportions and used the X-Wing pilot costume from a cheap Hasbro 12 inch Luke Skywalker.

The whole thing didn't take more than an evening. If it had it probably wouldn't have been finished, and isn't it a much better world to have such things in it?..... Well...? 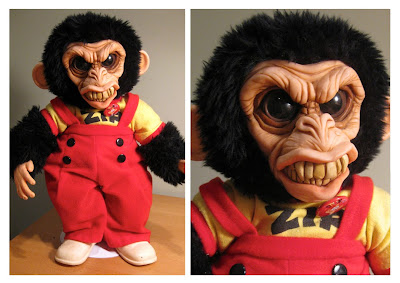 At the risk of ratting myself out as some kind of kit-basher I occasionally decide to mutate one toy into another.

I used to keep the normal version of this monkey doll in my car to wave at kids in other vehicles. At one point I had steel marbles in his eyes which gave him kind of a friendly terminator effect.

Then suddenly one day I decided to cut his face off and replace it with a a Super Sculpey version which just happened to be the right color so I only needed to add a little acrylic wash to it to pull out the detail. I used plastic teddy bear eyes behind the mask and actually wired the eyes to light up if I someday choose to add a battery pack to his forearm.

Standing upright on a doll stand he glares hatefully at me from the corner of my studio. 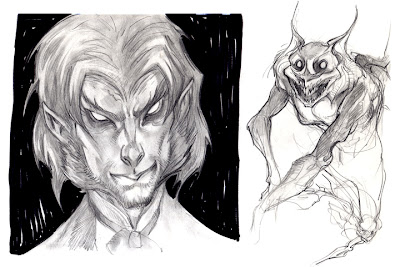 If you've spent any time looking through these pages you already know that I love to draw monsters. I've drawn a lot of monsters and other characters in various capacities over the years. These are concepts for an unrealized feature project.

I Love to say Monkey 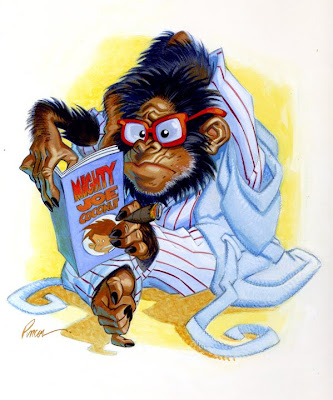 Sometimes an early character design is like a first draft of a story. There are some obvious choices made and much unrealized potential. I still like this little painting but it's the first draft of this character. His design and backstory has changed since I did this painting. Hopefully I'll get to share some more of him with you in the near future. 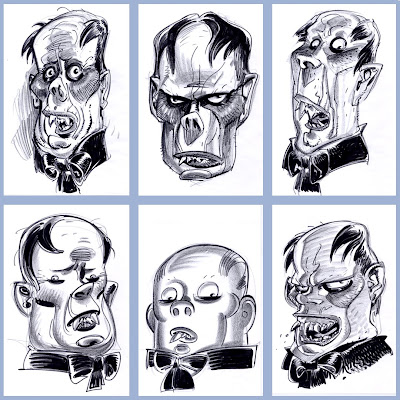 Can't stop drawing the Phantom of the Opera. These were drawn last week during a hugely important meeting. I have stacks of them numbering in the hundreds. I might compile them in a book, use them to build a shelter or paper the walls of the cabin where I write manifestos. Prisma and Tombo pen Each 8 1/2 X 11 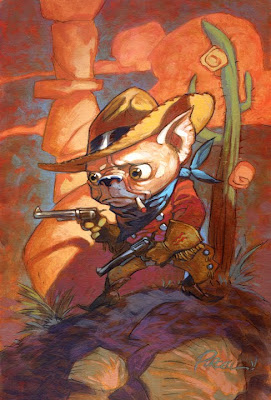 Here's my part of an overdue barter exchange. It'll be nice to finally have it off the books. I wanted to do some kind of pulpy western cover but cute. Or as cute as I can manage. I like working in garish colors, maybe from growing up looking at Basil Gogos Famous Monsters covers. It's more of a challenge for me to go more neutral which I might try in my next piece. 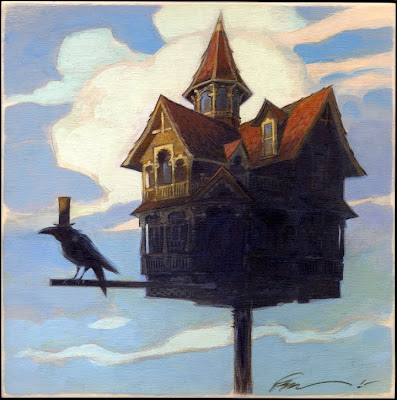 Posting this image again because the auctions have gone live this week.
Click here for this one. Check out all the pieces - there are some really great paintings up for auction and the proceeds go to a good cause. 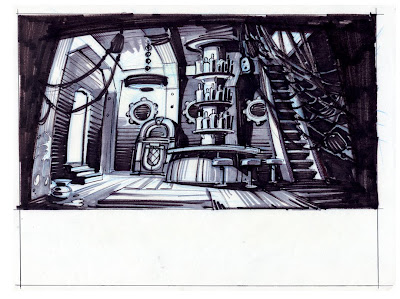 Speaking of Monkey Island; here's a rough sketch from one of the backgrounds for LeChuck's Revenge, the Bloody Lip Bar in downtown Wood Tick. Due to my severe brain cel loss and lead poisoning I don't tend to remember the names of these locations or much about the creation of these backgrounds, except that they were to be done in markers, so this one is a value sketch to spot the light source and shadows in anticipation of doing the final color art.

I do remember adding the ropes and hardware in the right foreground, thinking it would be fun to have the character pass behind those elements to create depth. Also I would look for opportunities to add fun details like the spitoon with overshot loogies all over the doorframe. I also liked adding anachronistic elements like the 50's era jukebox which sadly appears not to have made it into the final background. 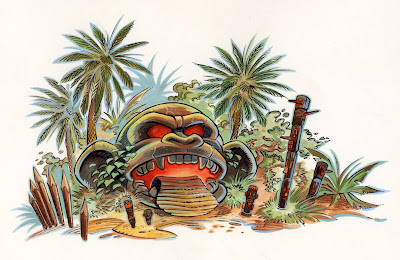 I don't see this one online right now. It was painted for The Adventurer, LucasArts game fan newsletter. When we drew the screen art for Secret of Monkey Island we had only a handful of ghastly colors to pick from, hence the blue green Monkey Idol in the game. For that reason as well as the tiny characters it was always fun, when I had a chance, to draw Monkey Island concepts the way I thought they should look.

Pen and Ink and Gouache 6X9 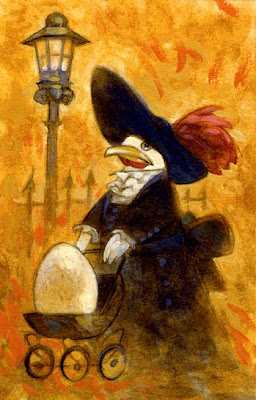 Here's an auction piece from a few months back for the Mother Hen Project. The auction was to benefit Chicks in Crisis, which supports unwed mothers and facilitates adoptions. 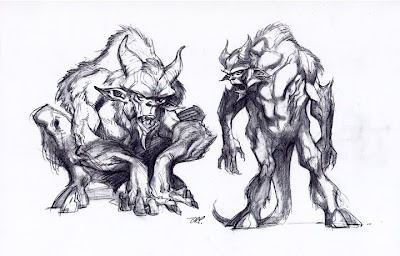 Here are a few lovable monster designs from a feature project. I like doing character concepts and most of the ones I've done professionally have been more of the stylized cartooney animated character type. Had fun doing these guys and employing the handy "smudge stick". 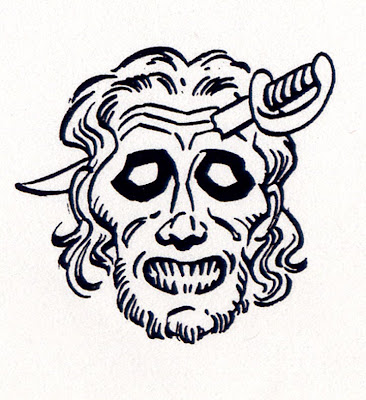 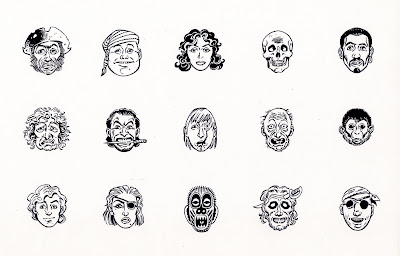 Happened across this sheet of Dial-a-Pirate ink drawings. The final versions of these heads were painted for the Monkey Island copy protection wheel. With all the Monkey Island tattoos that have been posted recently, it occurred to me that, maybe folks should consider a few of these pirate heads to disguise an unsightly mole or perhaps even to liven up a blank, pasty butt cheek or two.
Pen and Ink 11X14
--Starchie
UPDATE: Here, in case you never saw one or forgot or are making a polite effort to care, is an image (borrowed from KOTAKU") of the actual Dial-a-Pirate copy protection wheel in action: 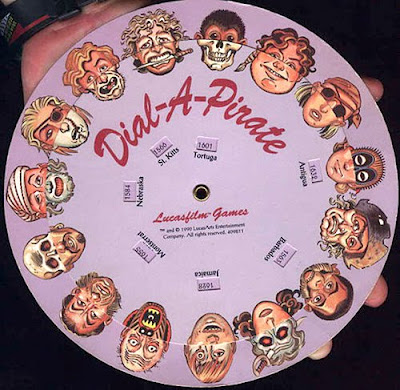