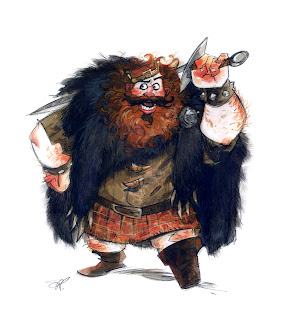 Here is an early character sketch of Merida's dad, King Fergus from the Pixar film "Brave". We always knew we wanted a blocky, furry, jovial chunk of a guy. I dashed out this painted sketch early on trying to capture some sense of his personality.

Awesome ! But tell me, Daniel Munoz Lopez drew for it, didnt he ?

Thanks all!
Jules -- Daniel did indeed work on Brave and did some great versions of Fergus along the way.

Nobody seems to have asked about this yet, but I was wondering: Why weren't you eligible for the Academy Award as a co-director. And why didn't the other two mention you in their acceptance speeches?

Seemed like a bit of a snub that the mainstream press didn't pick up on :(