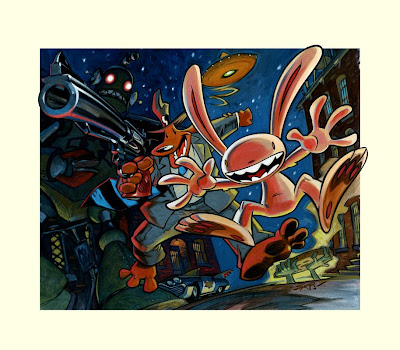 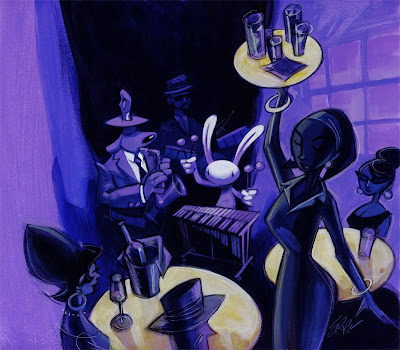 It's been awhile and the San Diego Comic Con was quite the distraction. At the show Telltale Games was offering the disc release of Season Two with my new painting which is also available as a print. Also, included here is the cover art for a new Sam & Max game soundtrack from Season Two. The music is by Jared Emerson-Johnson. It invokes the old Touch of Evil era crime flicks with smart, effortless nods to other genres.

Based on a reckless threat on my part to post some of my high school artwork I've had some requests to actually see that through. I've dug some out and I'll post them shortly if only to remind you to "Be careful what you wish."

Love the colours... i could marry them. lol

It seems almost ironic to see Max on the xylophone, but the clackers ensure an equally chaotic sound. As for the portfolio, I'm sure after a slightly more mellow comicon than usual you still have plenty of wanton destruction to go around.

oort --
How do you know I had a mellow ComicCon?

Did you have a mellow comicon?

oort--
It was pretty antic actually. But I did enjoy it.

Already pre-ordered both. Plus the case file. Now all that's left is being worried sick that Telltale's other projects will make Season Three's quality decrease until you guys prove me wrong once again in 2009. Can't wait.

That´s AMAZING, Steve! I admire you so much, I wish I could draw as great as you! Kisses,

They're both astoundingly beautiful, especially the second - I can only imagine how tricky it must have been.

I love the soundtrack cover!

Steve. You rock my little socks. This dark blue thing you got going on in the music scene is awesome. And the opposing yellow? So very very nice to look at. You can see when something's had planning, and when something's been winged. Man. I think Sam & Max should start their own band, Gorillaz style. As a side, I used to listen to the Hit The Road soundtrack a lot. It came on the game CD. Very very very nice smooth jazz. Bit MIDI-like, but that was back in the nineties. As another side, the lady sitting in the bottom right of the pic looks a bit like the psychic lady in Episode 1 of the first season. STILL though, I wait like a rabid dog for your high school offerings. ;)

Hey Steve, cool stuff as always. Is it cool if I post a pic of the loot I gathered from your Artist's Alley table on my website, or are there copyright issues involved?

Thanks for everything and looking forward to seeing your High School stuff. You should post some college work too!

No copyright issues. Go ahead and post your ComicCon photos. Thanks for asking.

The second piece feels like it was produced with passion. The use of colour and the negative space really gives it a touch of the swinging jazz style. Plus the complementary muted yellows and vibrant violets just cinches the relaxed atmosphere of a jazz club. It's funny to reflect on this and see how Sam and Max's character traits do not match this style. Yet, somehow it is pulled off eloquently and suddenly we're given a different persona of Sam and Max, maybe just for a minute before they start pummeling the closest waitress for an extra dry martini and a phone from the commissioner.

The first one, I cannot say anything more than your colour sense is something I hope to develop in my years as an artist.

Thank you for sharing all your amazing work! Your influence in my repertoire of visual artists is nothing less than invaluable.

your work has so much energy. It completely sucks me in. Thank you for sharing so much. you have yet another fan!

ho ho ho !!! i always enjoy to see new paintings about Sam and Max, My eyes are happy!!

Hi, Mr Purcell, i'm a Sam and Max fan from Spain, there is any way to get my Sam and Max Hit the Road signed?

your art is just amazing